General Description of the Carolina Dog

The Carolina Dog was discovered in the 1970's and named by Dr. I. Lehr Brisbin, a biology professor at the University of Georgia, at the United States Department of Energy's Savannah River Site in South Carolina. This is a remote area from which the public have been excluded, and wild dogs that have lived there for centuries have had little opportunity to cross-breed with domestic dogs. Dr. Brisbin noted that these dogs looked almost identical to the Australian Dingo. Other scientists observed that the Carolina's bone structure was very similar to the remains of Neolithic dog bones from Native American burial sites thousands of years old.

The Carolina Dog is a medium built dog, manifesting the features of most pariah/feral dog types. The large, erect ears (designed for optimal sound retrieval and possibly body temperature regulation), long, curved tail (used for signaling and communication) and short, dense coat have been naturally selected for to ensure survival under free-ranging conditions. Carolina Dogs should be kept in a natural state, with no trimming (other than nails) allowed at any time. 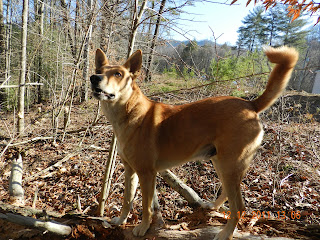 They are dogs of primitive appearance fitting the typical Long-Term-Pariah-(i.e, primitive/dingo) Morphotype (LTPM). The Carolina Dog's physical appearance suggests a dog created by and preserved through natural selection to survive in the remote lowland swamp and forest land regions of the southeastern United States, They closely resemble types of dogs first encountered by Europeans near Indian settlements in the region as is evidenced by paintings, drawings and written descriptions made by these early explorers and settlers.

The Carolina Dog Association is currently working to find the true History of these dogs, which were first included as a breed with the United Kennel Club in 1995. There are 3 theories in regard to the origins of the Carolina Dog in the U.S.:

1. they are the true remains of original dogs, native to the U.S.

2. They evolved from the dogs that came with Paleolithic man across the Bering Land Bridge and/or down the eastern seaboard, interbred somewhat with Coyotes/Wolves and evolved into what we see today, a similar story to what might have happened in Europe, Asia & Africa.

3. They are the result of "reverse domestication". The domestic dogs of the first European Settlers, through Natural Selection, reverting back to a primitive, Pariah type dog over generations, then mostly isolated until their discovery in the 1970s. Remember, only the best equipped survived in the wild.
*for more discussion on this subject, see http://carolinadogs.org/geninfo/name.html or see the CDA on facebook at http://www.facebook.com/home.php?sk=group_192874484065927

* I have recently noticed the many "LTPM" dogs reportedly turning up at shelters around the country, many being tentatively labelled as Carolina Dogs.  This has caused much debate if these are Carolina Dogs or other sub-type or "breeds" of LTPM dogs, specific to their own area of the country, sub-groups of an "Ancient Pariah Dog" that debatedly could be it's own Taxonomic Status, such as the Australian Dingo (Canis Familiaris Dingo). As of now, the breed standard of the Carolina Dog states " tall grass savannahs and bottomland swamp forest habitats of the South Eastern United States". Dr. Brisbin, as founder and owner of the Carolina Dog studbook, is the only one authorized to verify and add wild caught dogs to the breed registry. As far I know he, rightly so, is extremely selective about adding a dog to the breed registry and they must meet all the criteria, including original location. Hopefully more research, in the field and DNA, will be done, so these issues can be settled.

*They do not shed great amounts of hair like other dogs & rather than a 'dog' odor, they tend to smell like corn chips:)even when wet. This is probably a trait developed in the wild to aid in hunting prey & hiding from larger predators.

*These dogs are terrific with children. They are very social by nature, and enjoy the attention they receive from children. They bond quickly with their human "pack" and love to be included in all family activities.

*They tend to be easily housebroken (with proper training), easily crate trained, and are not destructive in the home, as long as they are kept mentally stimulated with toys, training, and lots of attention.

*Carolina Dogs tend to get along well with other pets, especially when they are socialized early. These dogs do well in obedience and agility training, frisbee competitions and any other physical activity you, as the owner, may enjoy.

*Please remember that Carolina Dogs aren't like other breeds! They are very different and must live as part of a gentle, loving family. They are physically tough, but survival  instinct is supreme and if they are mishandled, they will mentally shut down on you. BUT Carolina Dogs are NOT known to react viscously, not known to be biters. Viciousness is a disqualification according to the breed standards. I have never heard of a true Carolina Dog being viscous.

*Also, realize that these dogs instinctually have a "pack mentality" thus they require much human interaction and are family dogs, not kennel dogs. Your family & other pets will become their pack. Because they are gentle and kind by nature, they must have an abundance of love and attention and be a true part of your family to thrive. CD/AD's respond beautifully to positive reinforcement. Cruel treatment and harsh training methods will break their hearts and their spirits. They will excel in every venue with positive, loving treatment.

*Carolina Dogs have no known inherited diseases or problems. In my opinion, and according to many confirmed reports, they may be sensitive to certain strong topical medications, vaccines & medications. These things only need to be administered conservatively(see suggested conservative schedules on our Natural Rearing page), or not at all in dogs, or dogs in family lines that have had any type of vaccine or medication reaction. With the proper diet, they have superior immune systems & have even been reported to keep shed of parasites.
Posted by Susan Lewelling, Nature's Way Carolina Dogs at 5:13 PM