As you may have noticed, our banner and kennel has changed names. For seven years my kennel has been known as "East Tennessee Dingos". I have officially changed the name to "Nature's Way Carolina Dogs" in order to better reflect what we are and what I do.

Carolina Dogs are not Dingoes and are not related to Australian Dingoes, any more than they are related to coyotes or foxes. Carolina Dogs are classified as Canis Lupus Familiaris and Australian Dingoes are classified as Canis Dingo. Years ago, the slang name for CDs was American Dingo, and it was widely accepted. This was because when the CD was first discovered and a breeding program began they were thought to be related to the Aus. Dingo. But as DNA science and research has progressed that theory has not been proven. Australian Dingoes and Carolina Dogs do look similar, but Carolina Dogs look like Pariah Type Canines all over the world, such as in Korea, China, India, and many other areas of the world. That look and general behavior is called LTPM, Long Term Pariah Morphotype. You will see that referred to in the many scientific articles I have shared in my blog.
Using the slang name Dingo as part of my kennel name has caused some confusion. Commonly calling Carolina Dogs "American Dingos" has even began to precipitate some  breed specific prejudice, landlords not allowing pets called "American Dingos", and also so called AD's not being allowed on public transportation or in public places. Anyone who knows a CD, knows they are not aggressive dogs, and are not wild, especially wild like the true Australian Dingoes & New Guinea Singing Dogs.
I know families that have both Carolina Dogs and Australian Dingoes/ NGSD and there are vast differences in their behaviors. We do not want BSL to happen to our special & precious loving Carolina Dogs, hence the distancing from the slang name "Dingo". Dr. I. Lehr Brisbin and the Carolina Dog Society(official breed society via UKC), along with most breed enthusiasts and scientists as well, are now discouraging the misnomer American Dingo in favor of the official name Carolina Dog.

The other reason I renamed my kennel Nature's Way Carolina Dogs is to better reflect what I do with my CDs, how I raise them differently. My focus is to raise exceptional, thriving, healthy, breed standard Carolina Dogs for families that understand and appreciate the concepts of Natural Rearing. I have seen the dis-ease that conventional rearing can wrought upon dogs, especially generation after generation of Conventional Rearing, and my goal is to continue a line of CDs that are not dis-eased from the destruction of health that kibble, vaccinations and chemicals can cause. I believe in Natural Rearing so much that I decided to further my education in this field with courses at American Council of Animal Naturopathy. I am pursuing my Naturopathic Carnivore Nutrition Coach, Natural Rearing Breeder and Small Animal Naturopathy certifications in my spare time between raising a family, raising exceptional Carolina Dogs and my other obligations.  To learn more about Natural Rearing please search through the pages and blog posts on this site, and visit my professional consulting and information website Nature's Way Pets .

I will probably not be changing the ETD name to NWCD in all my old blog posts, and it will take some time to change it in all of my website's static pages but I will be using Nature's Way Carolina Dogs in all new posts and pages. I hope that you will also do your part to correct misconceptions with use of the slang name and attempt to always refer to our special breed as Carolina Dogs.
Posted by Susan Lewelling, Nature's Way Carolina Dogs at 9:40 PM 2 comments:

Taking Applications for Our Next Litter

East Tennessee Dingos next planned litter will be a Ellie Mae & Cooter litter, tentatively planned for Spring/Summer 2016! This litter will be 2nd generation Naturally Reared on the sire side, 3rd Generation Naturally Reared on the dam side. Right now (March 2015), Ellie Mae (future dam) is 5 months old, I will be updating her pictures & accomplishments as she matures.
I am taking applications for the waiting list now. When approved, you can secure a puppy from this litter with a $100.00 deposit, or be put on my non-deposit list and a few months prior to breeding I will contact you for a deposit if there are spaces left. First deposits paid get priority when all else is equal when matching a puppy(sex, temperament, color) to a family. The price for this litter will be $1000 per puppy. Sadly, I have been losing tons of money on my prior litters and I cannot afford to continue quality breeding & raising of quality NR Carolina Dogs without raising the price a bit, remember, you are getting a top quality UKC registered Carolina Dog, 100% Naturally Reared, Lifetime mentoring for raw feeding & natural care, ID tattoo & registration of the tattoo, as well as all the goodies I send home with the puppies. I do accept payments, between now & when you pick up your puppy so it is do-able for  most folks. I can take cash, Paypal, Check(in advance of pick up of puppy) & all major credit cards.
Please feel free to explore my website, and ask any questions you have! Also visit our facebook fan page: https://www.facebook.com/mycarolinadog for more pictures an updates on past litters and what my pack is into.
Prospective Puppy Family Questionnaire

Posted by Susan Lewelling, Nature's Way Carolina Dogs at 1:37 AM No comments:

Little River is available for adoption to an approved Raw Feeding/Natural Rearing home. 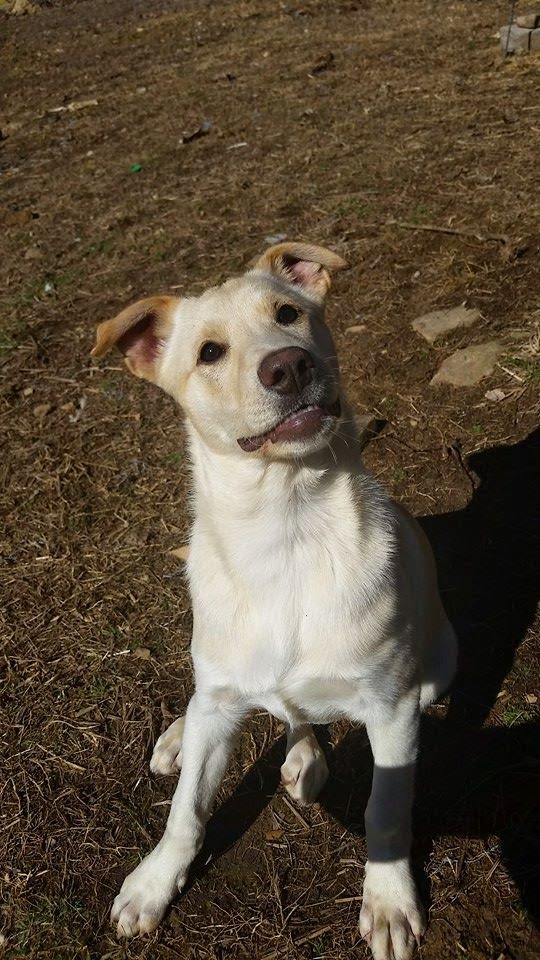 If you have always wanted a completely NR pup, and/or a Carolina Dog that is thriving & balanced , here is your chance! 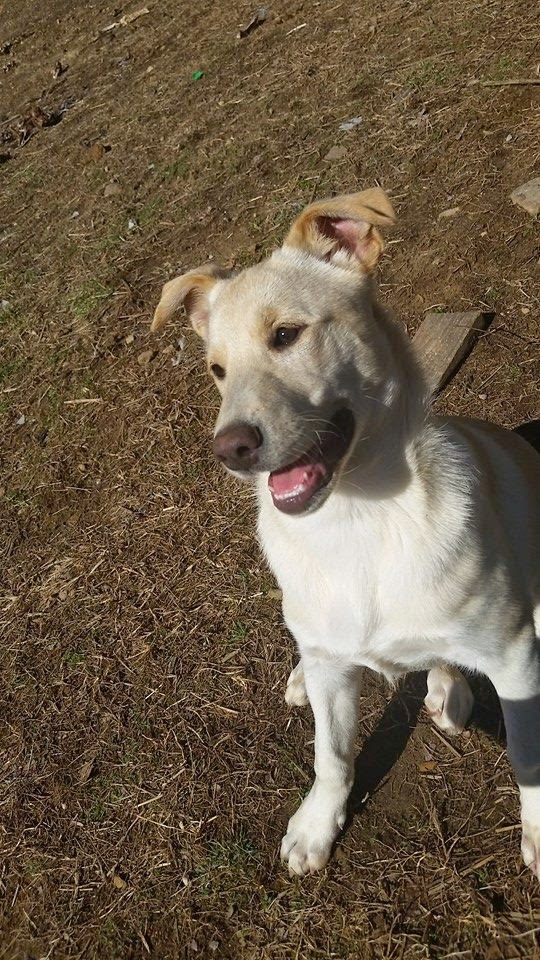 He is 4.5 months old & is the smartest dog i have ever seen. He learns just by observation or being shown 1 time. He is super sweet, soft & gentle & gets along with males & females & is submissive to older dogs & all people. 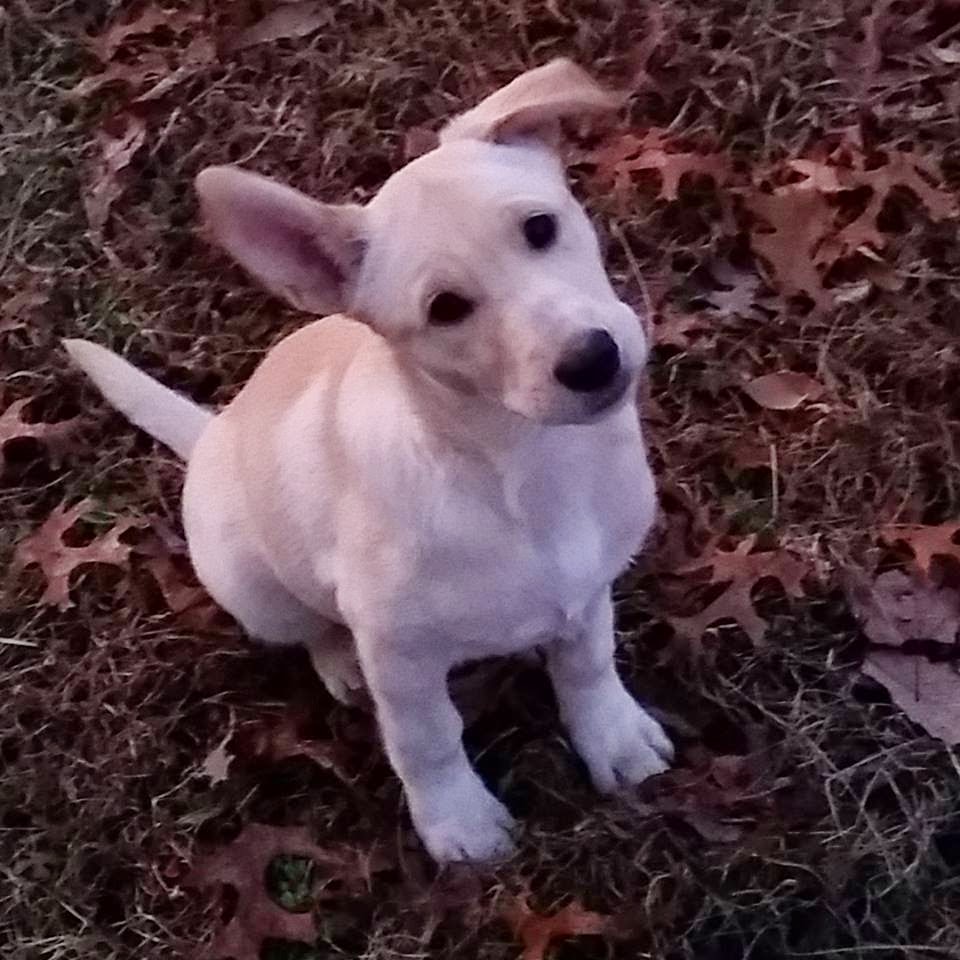 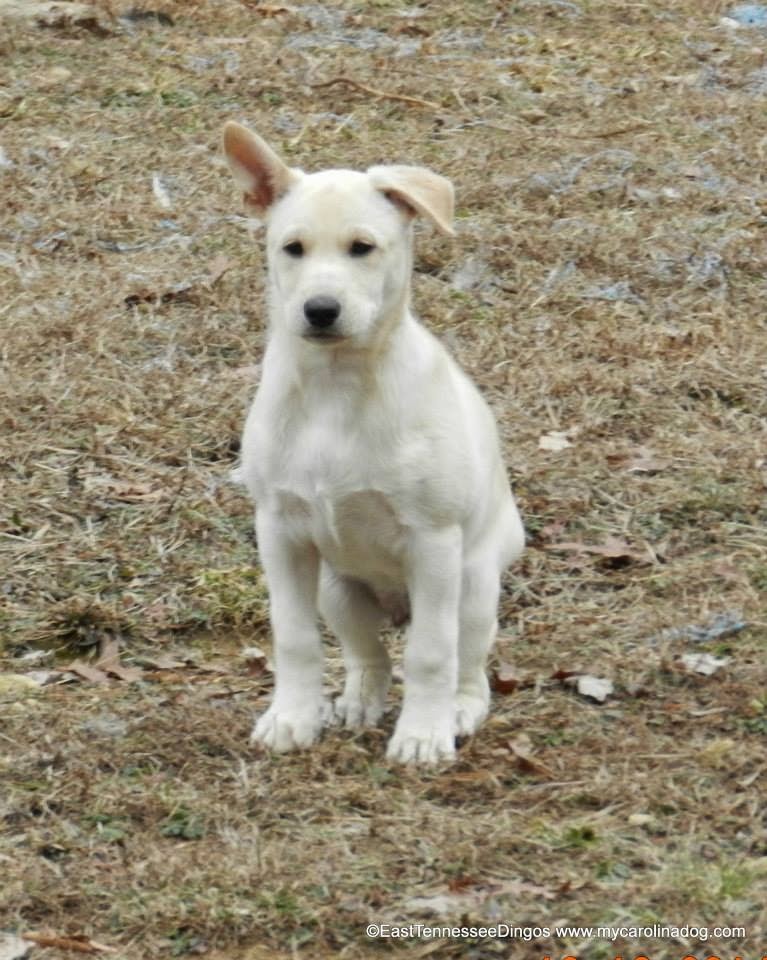 River is from a NR dam & has been NR his whole life, raw fed, no toxins, chemicals etc, on/in/around him. 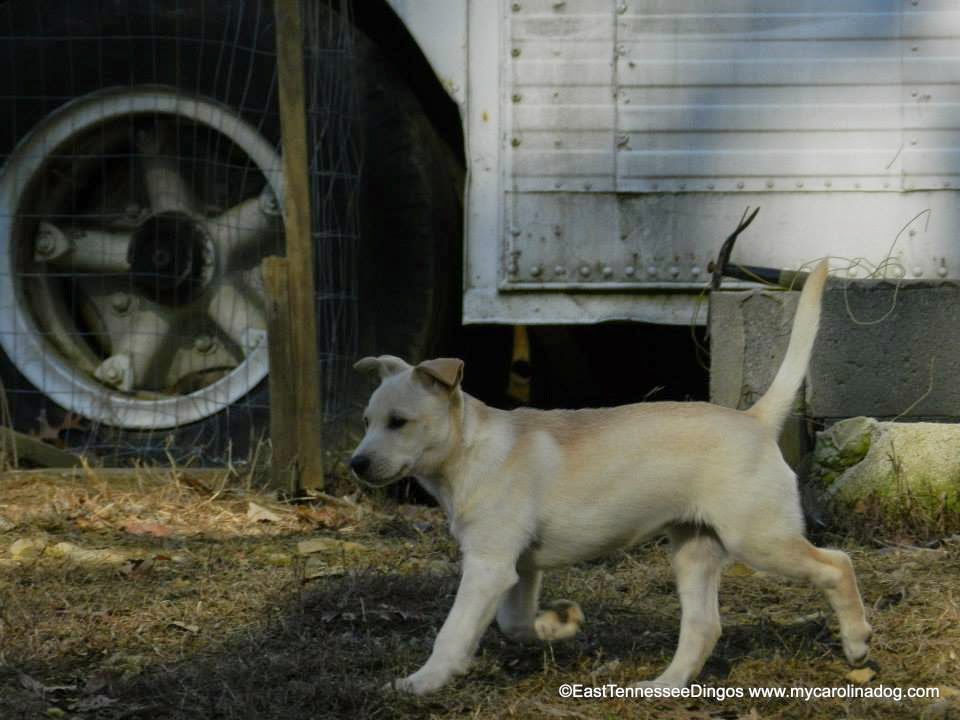 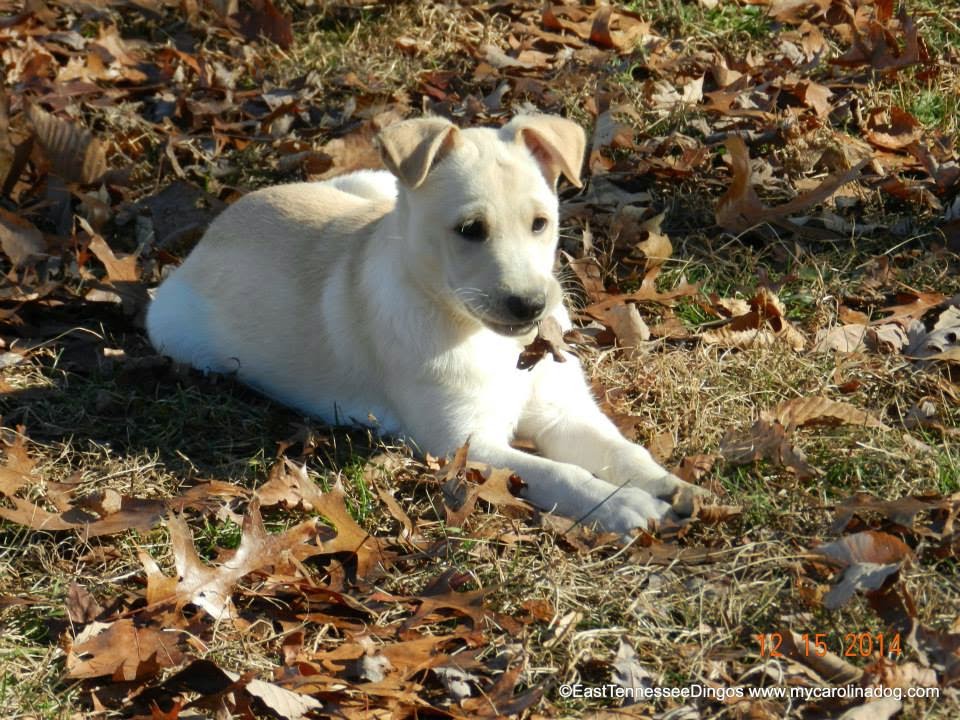 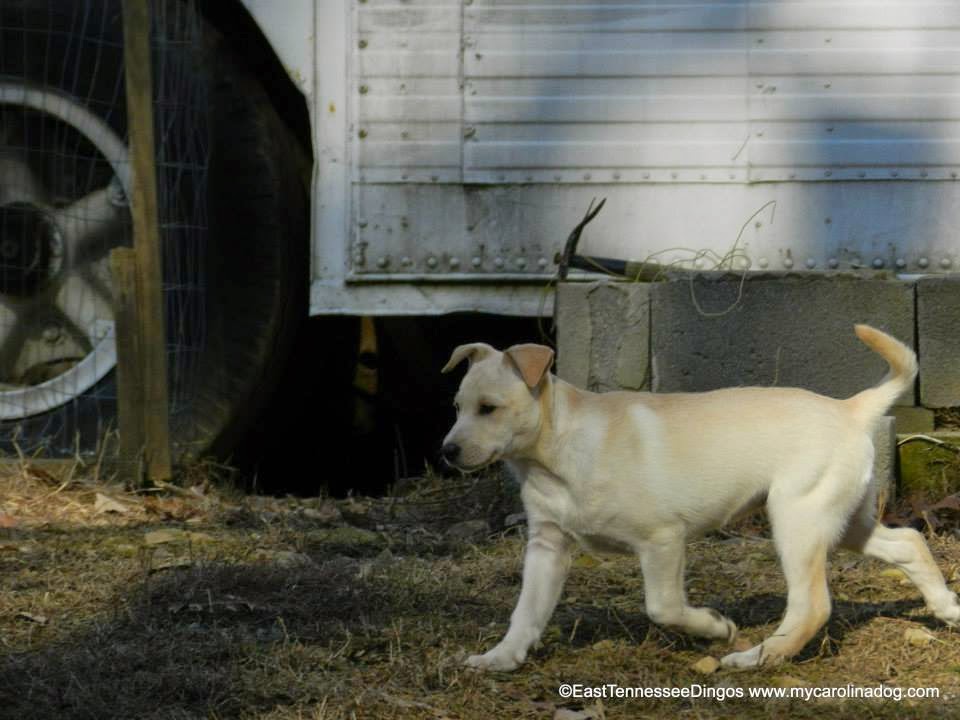 We are not planning another NR CD litter for at least 2 years, possibly longer! 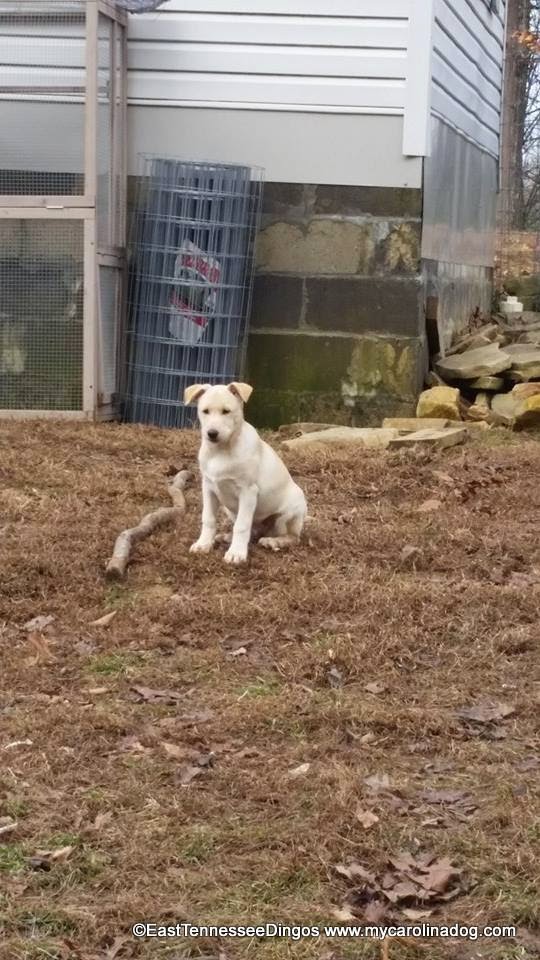 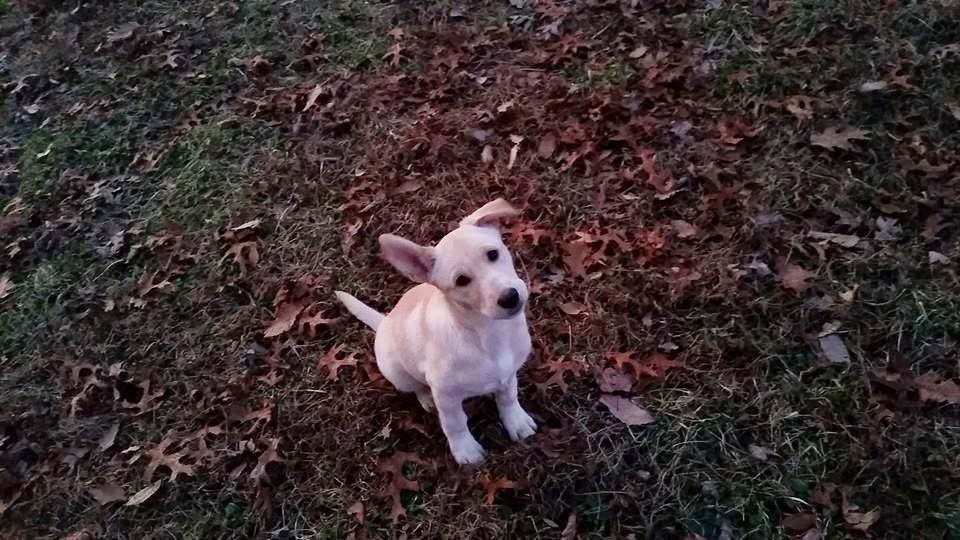 The family he was promised to has had some unexpected illness with their older dog & understandably cant take him at this time. 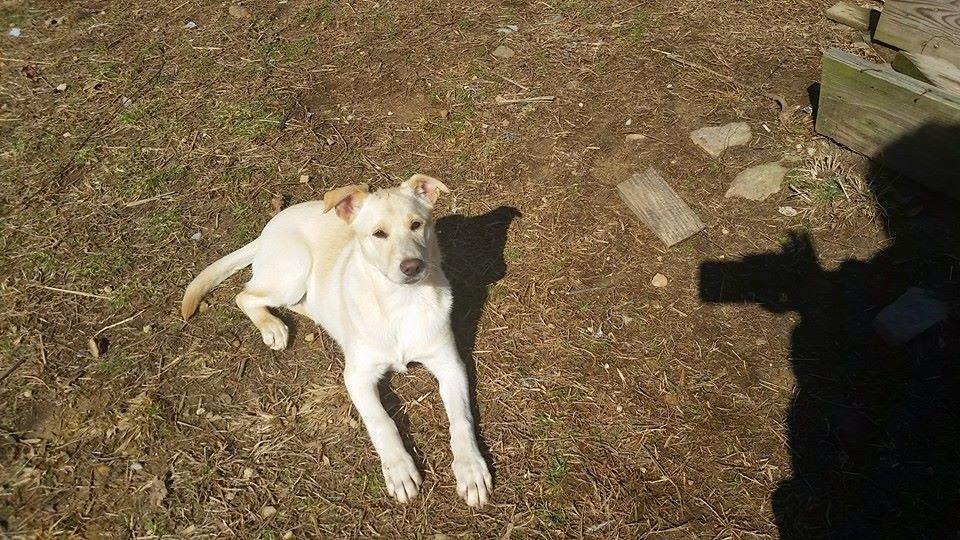 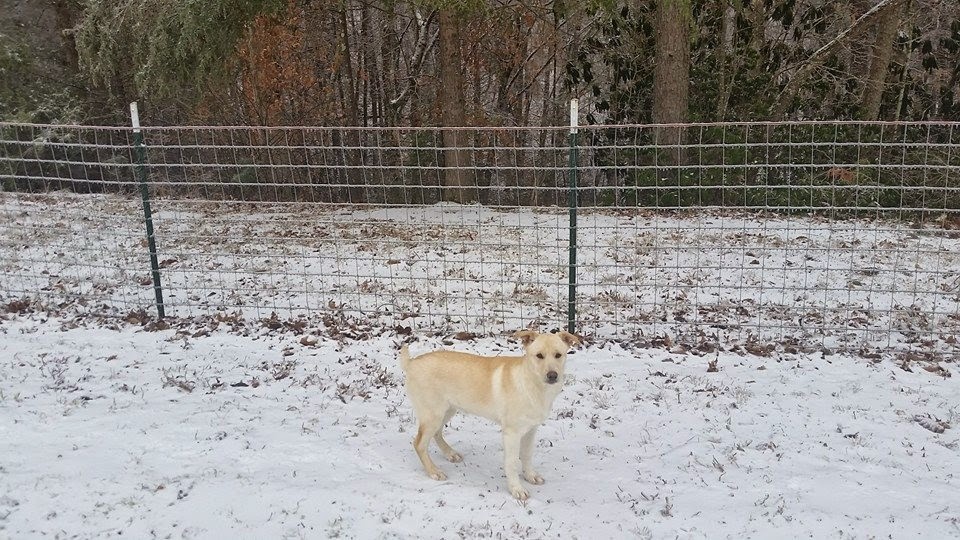 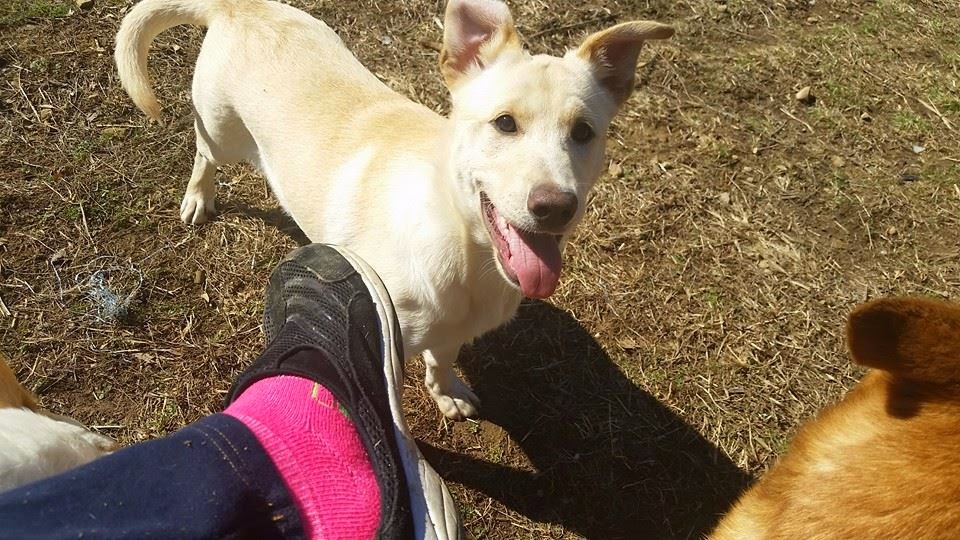 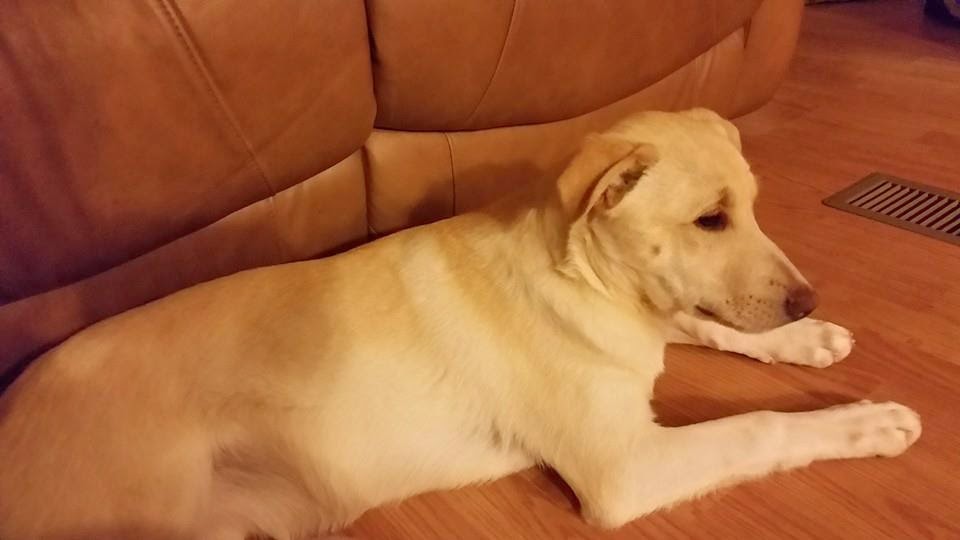 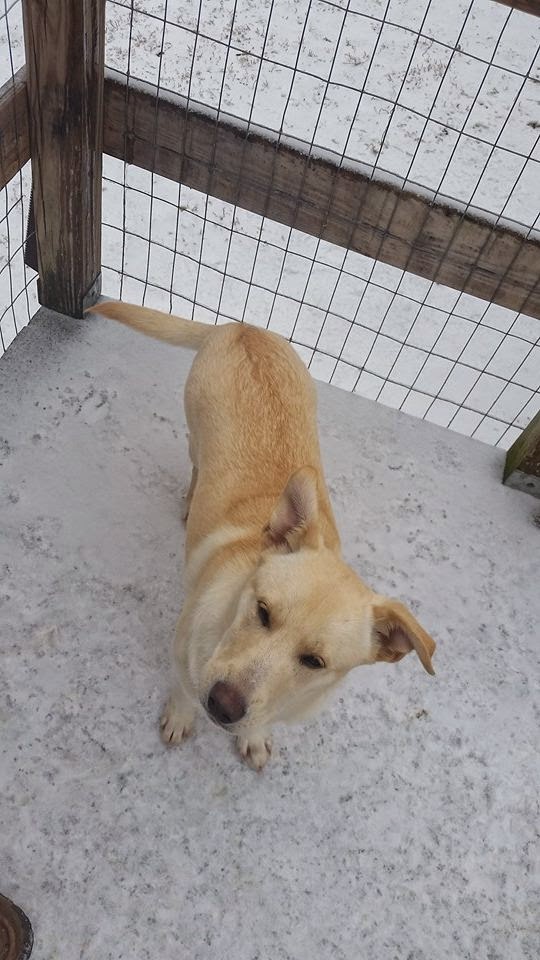 If you are interested in adopting Little River, please fill out a Questionnaire and email it to me @ susanlewelling@yahoo.com. His adoption fee is $400. prospective-puppy-family-questionnaire  also see About Adopting a Puppy from ETD


Hannah is a delightful 6 1/2 year old Carolina Dog from Kernersville NC. Hannah has unfortunately torn her ACL and requiresTPLO surgery scheduled for Feb.24, 2015. She is a good candidate for the surgery and is expected to have a good recovery. She will need to stay at the hospital for 2 weeks after the surgery to assist with  a proper healing. Donations can be made here or called in directly to Thomasville Animal Hospital, Dr.Milliner.336-475-9119 between the hours of 8 AM and 5 PM. All funds will go towards Hannah's surgery costs. If there are left over funds it will be channeled towards the next dog in Our Carolina Dog Families-Furever Tails Facebook group. We are grateful for your monetary support and prayers.

Via Cathy Reinl- "We offer help to everyone whenever we can but right now we are the ones who now need help.. Our Problem child Hannah (and I say it endearingly as she suffers mild seizures and just a year and a half ago she had surgery to remove Struvite stones that tried to kill her) is in need of surgery once again to repair her ACL.. WE have found a wonderful surgeon who will take care of her problem only we need help with the funds.. You can donate through Youcaring.com or to my paypal NCREINL@AOL.COM or for those who wish to directly pay on her acct at Thomasville Veterinary Hospital you can also do so by calling 336 475 9119 btwn the hr of 8-5 give the last name of Reinl and Hannah.. The staff there is very pleasant and will gladly help.. All I can say is thank you so much for those who choose to help us and we will continue to do our part to help Our wonderful Carolina Dog Families.. God bless y'all "
To Donate :
Hannah's YouCaring page
Paypal-  NCREINL@AOL.COMDirectly to Thomasville Veterinary Hospital office: call 336 475 9119 btwn the hr of 8-5 give the last name of Reinl and Hannah
"heart emoticon
Posted by Susan Lewelling, Nature's Way Carolina Dogs at 3:20 PM No comments: