About Us: East Tennessee Dingos 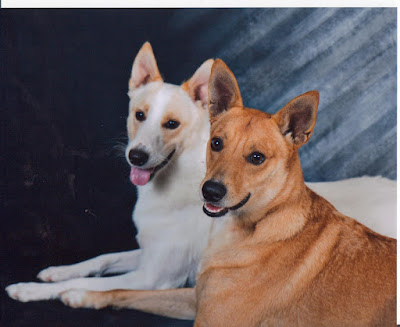 A Little About How We Began...
When I first found out about the Carolina Dog, I was intrigued. Medium size, little shedding, no doggie odor, pack mentality, and versatility were the qualities that first attracted me. I researched online and the CD/AD seemed like a perfect fit for our family. We started with finding a breeder of Carolina Dogs with excellent, original bloodlines, including many show winners in multiple venues.
Upon bringing our first CD home, our education in the differences between CDs and 'other' dogs began. We quickly became accustomed to and fell in love with the 'quirky' behavior of our CD. Beginner Obedience training, continuing socialization, and lots of love rounded out our Perfect Dog! Lots of research into the life lived in the wild by his ancestors and then a possible vaccine reaction led to more research regarding diet and vaccines.
At 7 months old, I started Cooter on a Species Appropriate Diet of raw meat, bones, and a small amount of vegetable/fruits. I found a wonderful Holistic Veterinarian, Dr Sandra Priest DVM, who guided me in making a raw diet plan and a minimal vaccination schedule.
Daisy came into our family early in 2010 due to the generosity of our friend, Jane Gunnell. Daisy was immediately switched over to a raw diet and after the puppy vaccinations Jane gave her, she has only received a Rabies vaccination, which is required by law.
East Tennessee Dingos
Lewelling's Pack
BC Tennessee Whiskey CooterBug & PR Banbury's Tennessee Daisy Jane  are from the prestigious Banbury Cross Farm in Aiken, South Carolina. Both are descended from dogs originally taken from the swamps & lowlands of South Carolina & Georgia, when Dr. Brisbin first discovered them and founded the breed.

BC Tennessee Whiskey CooterBug, aka ""Cooter"" 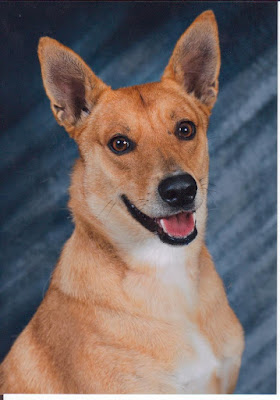 Cooter is an intact male. I have had him since he was 7&1/2 weeks old. He has been on PMR  sine he was 7 months old. Cooter is the classic ginger color. His birthday is March 28, 2008. He weighs 42.8 lbs.
He is named Cooter because my son loved the Dukes of Hazzard (tv show), so all of our animals are named after characters on the show. He has the Tennessee Whiskey in his name because we are from Tennessee, he is the color of whiskey, & I love the song Tennessee Whiskey by George Jones. Sappy huh? lol. The BC is for Banbury Cross Farm where he was bred & born.
He has a scar on the left side of his face because our cat BoDuke swatted & scratched him the day  we brought him home. Cooter ran right at BoDuke to try & play with him, which scared the cat. Cooter had never met a cat before, all he knew was there was a animal the same color as himself & almost the same size, a friend! BoDuke didn't think so....
Cooter also has had the tip of his tail broken. As a puppy he had a bad habit of  standing in the doorway of our front door when someone had it open. It was a heavy, metal & glass security door. My daughter accidentally let the heavy door shut on his tail and did not tell me. Cooter never cried about it so I didn't know until the bone was already growing back crooked. The vet said we would have to re-break it to straighten it out, so I have just left it alone. But the break does make his tail look like it curls over his back.  When he is excited or alert he holds it out straighter and you can tell it is the classic fishhook shape.
Cooter is my baby. He loves to curl up on the bed with me & lay on his back with all his legs spread out for a belly rub! This is probably because I held him like a baby & scratched his tummy for hours when he was small and he would fall asleep in my arms!
Cooter is probably what you would call a Type-A personality. He is very alert and aware of everything, down to a piece of furniture being moved, someone pulling in the driveway, walking past our house, or even a small tree branch that has fallen into the yard.  He even knows when the neighbor lets his dog outside to potty. He chases every squirrel, bird & cat from our property. He is very well behaved (well, most of the time) and will not touch anyones food, even if it is left unattended. If he lived in the wild with a dog-pack he would probably be one of the "watchdogs". 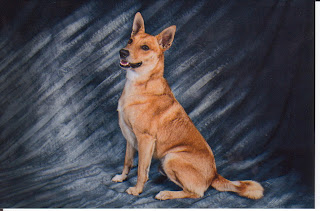 Cooter was a breeze to potty-train, I suppose because of his attention to detail. He loves his crate & still sleeps there, even putting himself to bed at night.
Cooter loves children, even babies & toddlers . He is somewhat suspicious about strange men, mostly when they are coming toward his pack or yard(this is a CD characteristic) more so than strange women and will bark at someone if he decides the person is a 'threat' to his pack. He has never attacked or tried to bite anyone, but he has done some ferocious-sounding growling at some. Once you are introduced and he gets to know you, you will have a friend for life! When he is scared, he will shake all over but has never snapped at anyone out of fear or pain. Sometimes he shakes when I tell him it is bath-time! Cooter does not like to swim, although he will willingly wade in water up to the bottom of his neck. I think he don't like getting his head wet, because he don't like going out in the rain (ya- he's a little spoiled!)
Cooter is a HABIT therapy dog. He currently has 2 assignments, one is visiting the residents at an Alzheimer's facility, and the second will be at our local Primary school, participating in the Ruff Reading program with 1st & 2nd graders.
Cooter loves to chase a Frisbee or a ball (he has a strong prey drive), play tug-o-war, and jump- I hold his toy out & he jumps for it. He will play 'jump' until he falls over exhausted & he has jumped his entire body higher than my head (5f-6in)  but he cannot master jumping and catching the frisbee in his mouth when I throw it! He knows several commands/tricks: sit, come, down, roll over, turn over, up/beg, stay, wait, leave it, easy, get in the car or house, jump, fetch, heel, and we are working on BANG(fall over & play dead).He loves to play hide & seek with one of his toys. He 'hides his eyes' in his crate, while I hide his toy somewhere in the house (or the yard if we are playing outside), then he tracks it down. He loves doing this!
Cooter is my picky eater. He has to suspiciously sniff everything before he will even touch it. He used to do this weird thing with his kibble (probably because he knew it was bad for him & he didn't want to eat it). He would push it around with his nose & make sideways motions with his head, like he was pushing leaves over it to hide it. here is a link to a funny video of him doing it:
http://www.youtube.com/watch?v=RBXiVMDN7nM 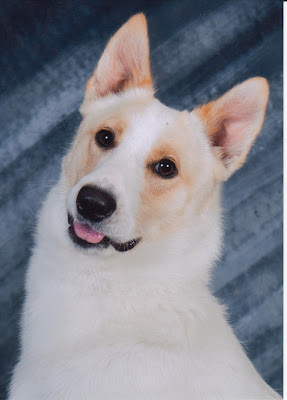 Daisy is our intact bitch. Her birthday is April 7, 2010. We have had her since she was 8 weeks old. She has been on PMR since the day we picked her up from Jane Gunnell.  She is named for Daisy, on the Dukes of Hazzard & Jane for Jane Gunnell, and Tennessee because that's our state. Banbury's because that's where she was bred & born.

Daisy has a cream & ginger piebald coloring. Her overall color is cream, with very light ginger markings over her eyes, ears & face as well as the base of her tail. There are also small spots of the ginger throughout her body but you have to look very closely to see them! She weighs 41.2 lbs. Her fur is a little longer & softer than Cooter's but it is still within the CD standard.

Daisy is our happy-go-lucky pup. She is not picky about anything and she always looks happy. She is very friendly and outgoing. She is a doggie garbage disposal, she will eat anything without a second thought! She loves to play chase and bark at the neighbor's cats. She frequently makes me think that if she was a person, she would have a comedian's sense of humor!

Daisy has the CD suspiciousness of strangers, but is more likely to stand silent & watch what a stranger will do before barking, Daisy loves all children & is very gentle & well mannered, even with elderly people, although she has less obedience training. She also has a stubborn streak.

Daisy likes to chase Cooter when he is playing fetch & will grab his frisbee or toy & run from him! She loves to tease him!  She is very social and the one most likely to play with other dogs at the dog park. She will bark at other dogs when they won't play with her to try & entice them to play.  She knows several trick/commands as well: sit, come, down, get in the car/house, leave it, wait, fetch, heel, and we are working on roll over. She loves chasing a toy on the flirt pole & frequently will fly through the air and catch it in her mouth. 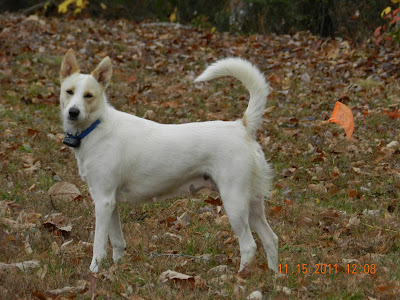 She was very easy to potty train as well. She loves her crate  & sleeps in it at night, but she also loves sneaking in my bedroom & curling up on my bed!  She loves baths, & wading in the creek. (we have not had the chance to take her swimming yet)  She loves running through the creek, splashing water everywhere & biting at the water. She also like to drink from the water hose.

Posted by Susan Lewelling, Nature's Way Carolina Dogs at 12:17 AM