We have had an exciting, busy summer this year. Let me see if I can get you updated on the major happenings.
We have added 3 goats, 4 hens and a rooster named Happy to our little farm. These livestock will be bred and raised ultimately for food, and will be cared for naturally, pasture fed, and toxin free. All animals on our farm are pets while they are here and are attended to accordingly, humanely and lovingly.


After the initial excitement, the CDs have accepted the new critters as part of the pack.
The most exciting addition to our pack came on July 2 in the form of a young possible Carolina Dog named Daisy that we renamed Dixie.

Dixie was born to a free ranging mother in an abandoned barn in Campbell County, Tennessee. The area where she was born is in between a Wildlife Management Area, a large TVA lake and 2 State Parks. The owner of the farm found the pups, he couldn't catch the mother so he took the pups when they were about 5-6 weeks old. He estimated the puppies were born the first week in January 2016. He gave the puppies away in the parking lot of a Dollar General Store. A friend of mine took this little girl home with her and named her Daisy. The family ended up calling her "Crazy Daisy" because she was so different from any dog they had ever experienced. The family did their best to care for her but she just never fit in with their pack and family so they were going to give her away on Facebook or Craigslist. I saw my friend's Facebook post and upon talking to her and seeing pictures I suspected that she could be a Carolina Dog.
When I got her, Dixie was a very nervous 6 month old. I suspect the puppies were too young to be removed from their mother and this affected her personality. The family she first lived with also had 5 active special needs children, 3 older grumpy dogs and very busy parents and in my opinion this just wasn't the best situation for this girl. She did  not know how to walk on a leash and was very scared of every sound and person. 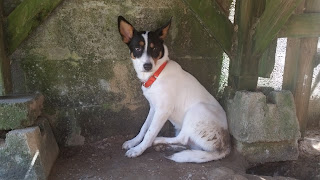 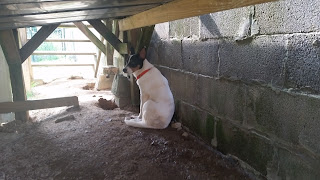 For the first week we had her Dixie stayed under the porch and would not even interact with my pack for several days. I had to bring the rest of the pack inside so she would come out and potty. She would let me crawl under the deck with her to pull her out but would not move on her own. 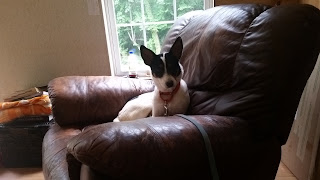 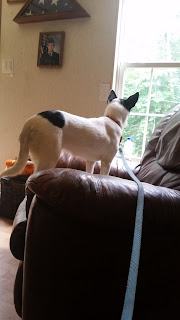 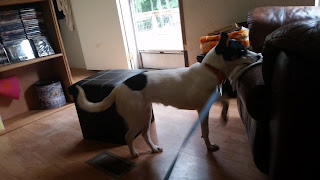 Slowly, she started to relax and learn how to be a dog. 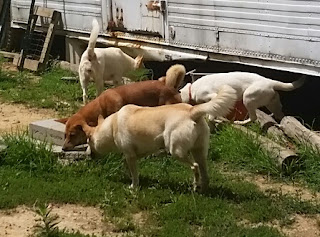 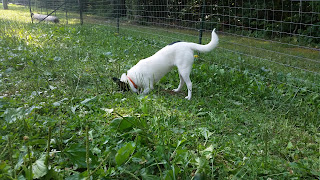 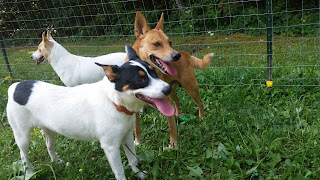 In August, we took Dixie, along with Cooter, to a  Barn Hunt Fun Trial. We wanted to expose her to more dogs and people, new experiences and see if she would enjoy hunting Rats. She did good with all the new sights, smells and people, but was too leery of the people watching to concentrate on hunting rats. She did sniff the rat, but then noticed the people crowded around the ring and got scared and retreated to the corner.  We may try again when she gains more confidence. 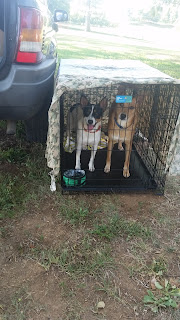 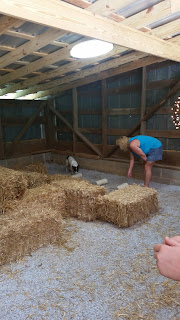 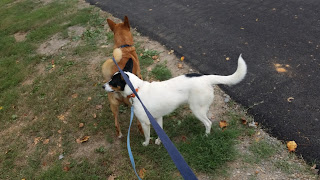 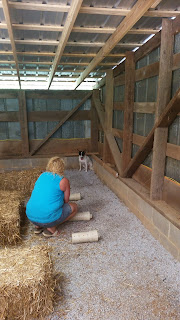 Dixie has bonded with my other dogs and is now part of the pack. 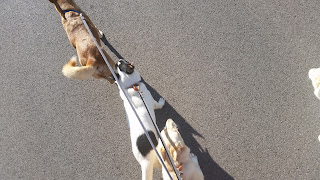 We are walking as a pack several times a week, several miles around our neighborhood and this is helping Dixie to gain confidence. 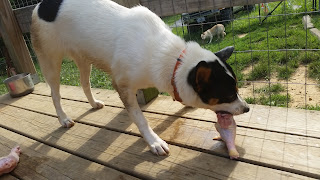 When we first got Dixie, she had a cherry eye, and a greasy, smelly coat. She was fed kibble but was un-vaccinated and had no toxic "preventatives" on or in her. I immediately started her on a raw diet and the detoxification began. She  experienced eye boogers and shedding for about 2 months. It didn't take her long, only about 2 days, to figure out that the food was superb! She has now been here a little over 3 months and is shiny, has no odor, her teeth are sparkling clean. She has lost the kibble pudge and is all muscle and has grown quite a bit. Her cherry eye is almost indistinguishable now. When I first got her she could barely crunch up a small chicken bone but now her face and jaw muscles have built up and she handles all size appropriate bones with ease. 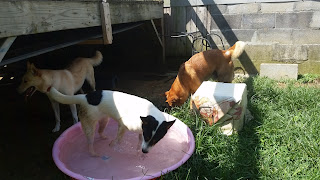 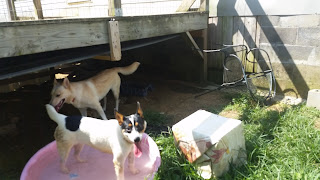 Dixie loves the wading pool and will even lay down in it to cool off. 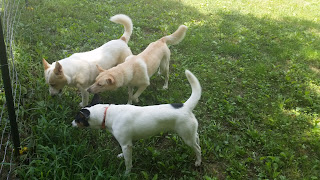 All 3 girls were in heat in August, but none were bred because we dont prefer to have puppies in the wintertime. The next heat cycle should be approximately February 2017 and pending a couple more committed families waiting for puppies, we will plan on breeding then. I am not sure what female we will be breeding with Cooter this time but I'm sure the puppies will be precious!  The puppies would then be born in approximately April or early May (59-63 days gestation) and ready to go to their new homes in July(at 8 weeks old minimum) . If you are interested in a 2017 NWCD puppy, see Puppy Information & Application and get your completed application to me ASAP! 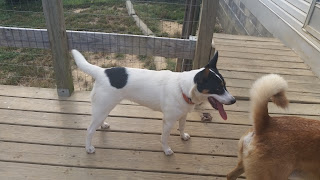 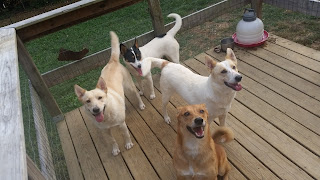 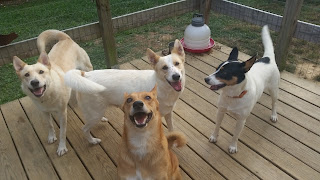 Trying to get a nice group picture. 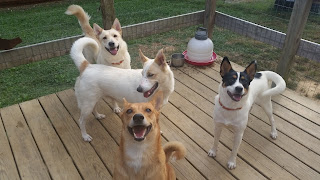 I am currently working on getting the required pictures of Dixie in order to have her reviewed by Dr Brisbin for addition to the UKC registry and studbook. She is still young, so is rarely still and is reluctant to "pose" for pictures. I will update as we move through this process. 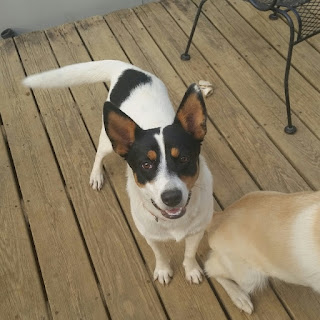 September 28 to October 2 we are taking Cooter to a Barn Hunt Trial at Finny Farm in Greenback, TN where he will be trying for his Open title and if he gets his Open title and has runs left on the schedule, the Senior title as well! Look for pictures and video soon after. 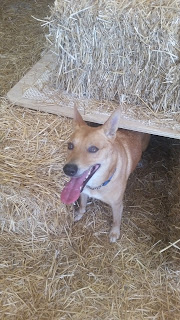 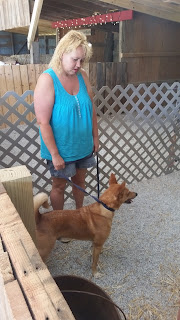 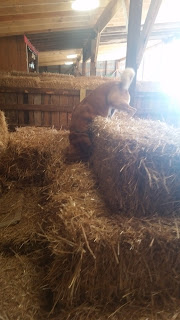 So that is the major things that have been going on with us. Let us know what you think about our new additions!

Posted by Susan Lewelling, Nature's Way Carolina Dogs at 2:47 AM No comments: