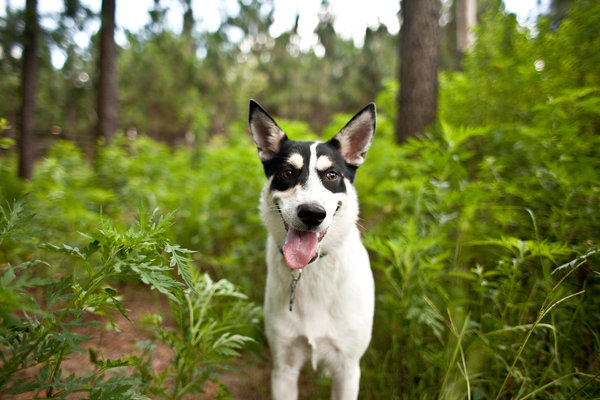 John W. Adkisson for The New York Times
Peony, a Carolina dog. Some of the breed’s rare traits include a fishhook tail, a pointed, somewhat lupine face and the habit of digging snout pits.

BISHOPVILLE, S.C. — Inside a fenced acre on the swampy Lynches River flood plain in central South Carolina, seven of Don Anderson’s primitive dogs spring into high alert at approaching strangers. Medium-sized, they fan out amid his junkyard of improvised habitat: a few large barrels to dig under, an abandoned camper shell from a pickup, segments of black plastic water pipe and backhoed dirt mounds overgrown with waist-high ragweed.

The Carolina dog has an American pedigree going way back — to the Ice Age; young people in a remote Australian village create a new tongue; a guide to the upcoming changes to health care.

Connect With Us on Social Media

Don Anderson keeps a number of Carolina dogs in Bishopville, S.C. Along with the Peruvian hairless and the Chihuahua, the Carolina dog lacks some genetic markers indicative of European origin.
These are Carolina dogs, and though they are friendly, one can instantly sense they are different from other dogs. Several rush to the gate, their whole bodies wagging eagerly. Others sprint off and take position — their jackal ears fully erect, their fishhook tails twitching like flags in a stiff wind. A black pup scrabbles away in crablike submission that eventually takes her into an underground den, dug deep enough that she is not seen again.
Walking into the pen is dangerous for only one reason: one of the dogs’ defining habits is digging snout pits, or gallon-size holes in the ground, perhaps to root for grubs or munch the soil for nutrients.
“It’s like a lunar landscape,” Mr. Anderson warns as we tread carefully into the underbrush.
Some Carolina dogs still live in the wild, and local people have long thought they were one of the few breeds that predated the European arrival in the Americas: “Our native dog,” as Michael Ruano, another enthusiast who often works with Mr. Anderson, put it. “America’s natural dog.”
Now, a new study of canine DNA backs up the folklore. A team led by Peter Savolainen at the Royal Institute of Technology in Sweden has reported that several dog breeds in the Americas — among them the Peruvian hairless, the Chihuahua and the Carolina dog — are without somegenetic markers indicative of European origin, suggesting they arrived in an earlier migration from Asia.
The study also reawakens the long debate about where and how dogs were domesticated. Current theory speculates that they are descended from wolves that somehow became attached to humans perhaps 12,000 to 33,000 years ago — an early amity that has an extensive pedigree in human folklore. (Think Romulus and Remus.)
But where that may have happened is not entirely settled. Some say the earliest dogs emerged in the Middle East. Others point to an area south of the Yangtze River in China. Dr. Savolainen’s study provides more evidence for the China hypothesis and, as a result, lends support to the idea that the earliest domesticated dogs crossed the Ice Age land bridge known as Beringia some 12,000 years ago.
Carolina dogs, then, could be camp followers that wandered off from their Paleo-Indian masters and took up residence in swampy areas where they can easily hide out from their own natural predators.
Encounter With a Puppy
Mr. Anderson, 79, is a Virginian who moved to South Carolina in 1961. He’s a garrulous man dressed in comfortable blue stretch pants, a pair of Crocs on his feet, and a headband to hold back shoulder-length hair that stubbornly retains some glints of blond.
He remembers the day, back in the Nixon administration, when he had his first encounter with these wild dogs. Down by a nearby water hole on his land, he spied a mother and three pups, and they immediately bolted.
“Two of the puppies went east, and one puppy tried to get out west and he got stuck,” he explained. He took the pup home and named him Tadpole.
Not long afterward a stranger saw the dog and offered Mr. Anderson $300 for what his neighbors called a “Lynches River wild dog.” He refused the deal, thinking, he says now, “if he’s worth $300 to you, then he’s worth $300 to me.”
Mr. Anderson soon learned that others called them Carolina dogs, a name given to them by I. Lehr Brisbin, a biologist with the Savannah River nuclear power plant, near Aiken, and the man most responsible for the current interest in the breed. In the early 1970s, Dr. Brisbin was employed checking out the wildlife on the periphery of the plant and often came upon these wild dogs in the swampier parts of his domain. He took a few in and today maintains an 18-acre enclosure where he has his own pack.
Dr. Brisbin got the Carolina dog recognized by the United Kennel Club and was the first to describe some of the breed’s rare traits, including the fishhook tail, the pointed, somewhat lupine face and the habit of digging snout pits. The dogs cooperate as a pack when they hunt a field mouse or a rabbit, possibly using their white hindquarters as signals.
“That white fishhook can be hoisted like a white-tailed deer’s and can flash back and forth,” Dr. Brisbin explained. “I saw them do it, and I saw the rest of the pack honor it.”
Carolina dogs typically go into heat once a year, like wolves, instead of twice, like domesticated dogs. They cover up their scat by pushing dirt over it with their noses, not by using their hindquarters to scratch the ground.
Still, determining just what is and is not a Carolina dog requires a kind of gut instinct. To Mr. Anderson, it’s a matter of “I know it when I see it”; Dr. Brisbin is more blunt.
“The Carolina dog is a breed created by Brisbin,” he said, referring to himself in the third person, “by picking dogs he likes, the type that he thinks typify the ancient dog.”
NEXT PAGE »

A version of this article appeared in print on July 16, 2013, on page D1 of the New York edition with the headline: A Dog That Goes Way Back.

(Page 2 of 2)
This is not to say the Carolina dog is more mythic than real. But the problem is that some of the wilder dogs have mated with other breeds — local dogs and even coyotes. Determining just what is a Carolina dog means becoming more finely tuned to the sense that anyone feels stepping into Don Anderson’s enclosed acre. Experiential knowledge is crucial, being able to sense the entirety of the animal and in that way recognize which dog is almost purely Carolina and which is more of a mix.

The Carolina dog has an American pedigree going way back — to the Ice Age; young people in a remote Australian village create a new tongue; a guide to the upcoming changes to health care.

Connect With Us on Social Media

@nytimesscienceon Twitter.
Like the science desk on Facebook.
Most Carolina dogs are ginger-colored, like Australian dingoes, but they can also be black and piebald. Most, but not all, are short-haired.
Some have tiny patches, right above their distinctive almond eyes, that look like a spare set of eyes, what Mr. Anderson calls “spirit eyes.” Some have an unusual white stripe at the shoulder. There are the noticeable ears and the tail, but also the athletic tucked-in stomach (like a Doberman). DNA studies may soon make it easier to assert the Carolina’s distinctions from other dogs.
Early Sightings
Awareness of this unusual dog has its own history. According to Mark Eden, another enthusiast working with Mr. Anderson, the journals of the 16th-century Spanish explorer Hernando de Soto include possible references to Carolina dogs.
In the essential narrative of early American natural history, William Bartram’s 1791 book “Bartram’s Travels,” the author runs across a Seminole Indian maintaining some horses and writes: “One occurrence, remarkable here, was a troop of horse under the control and care of a single black dog, which seemed to differ in no respect from the wolf of Florida, except his being able to bark as the common dog.”
In his journal for Feb. 16, 1806, Meriwether Lewis writes of an “Indian dog” that is “party coloured; black white brown and brindle” with “ears erect and pointed like those of the wolf” and used by American Indians to hunt elk.
In the late 19th and early 20th centuries, the dog’s wildness and its ginger coat — and probably its use by the poor as a hunting dog — led to the name “yaller dog,” typically spelled that way except by the kind of manor-born people who say “chitterlings.”
And that may have given rise to the term “yellow dog Democrat” to describe the anti-Republican die-hard in the South, as in the 1920s slogan “I’d vote for a yellow dog if he ran on the Democratic ticket.”
The occasional revival of interest in the Carolina dog happens this time just as enthusiasts make the case for its inclusion among the ancient dogs the world over. Dr. Brisbin also suggests that the Carolina dog fits in the niche of “pariah dogs,” dingo-like and appearing to survive in difficult habitats, like Don Anderson’s swamps, typically on the outskirts of ancient human migration routes.
There are many of these older dogs: the Canaan dog of Israel, the Santal hound of India, the Jindo of Korea, the Telomian of Malaysia, the New Guinea singing dog, the Kintamani dog of Bali, the African basenji — and the images that pop up in a Web search are oddly similar to those of the Carolina dog.
Continents and millenniums aside, they possess many of the qualities Dr. Brisbin and Mr. Anderson describe. These primitive dogs started living near people tens of thousands of years ago, finding a place just out of sight of human encampments — where, if the current studies hold up, they steadfastly remain.